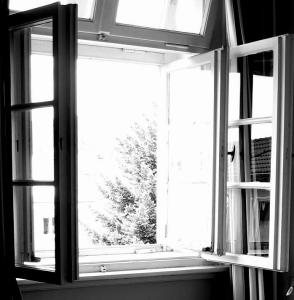 As some of you may know and some of you will find out (in about as long as it takes to you finish this sentence): I am in GERMANY!! I’m on a Study Abroad Program for five weeks this summer in a little town called Konigswinter (a suburb of the bigger city called Bonn–the birthplace of Beethoven). I so super love it here. The air is humidity-less and the birds sing sweeter in another language.
I’ve already been here a week…may not seem that long, but there’s already too many stories to try to catch up on (I’ll do a Day 1, 2, 3 thing later) so I’ll just skip to today. Nope, changed my mind. I’m rewinding to yesterday because I have the experience of a lifetime and I need to tell you about that first.
Thursday we (the CSU Jackson 5 as we call ourselves: Kori, Shane, Robin, Caleb and myself) struck out on our own for the city of Amsterdam. Left to catch the train after breakfast and it turned out we had our own compartment..whoa. We arrived and walked for a while in the wrong direction, backtracked, found our hotel (the Best Western Apollo Museumhotel–yes, it’s all one word), checked in and went to find some dinner. We ended up eating at the Hard Rock Cafe: Amsterdam. It was wicked cool. Then we strolled through the streets dodging bikers, cars, and dogs as we went only to find ourselves in the middle of this huge lawn full of picnickers. It was wonderful. We stretched out on the grass and soaked up some culture all the while taking pictures of the ducks, people and mermaid in the little pond (dubbed a mermaid because all we could see were bubbles and obviously that means it was a mermaid…and we’re theatre people).
The next morning we woke up at 6:30 so we could get in line at Anne Frank’s house which opened at nine. We had heard that the line was REDIC so we figured if we were there about an hour early we might be fifth or sixth in line…right? Well apparently we were the ONLY people in all of Amsterdam who thought of that: We were first…for a WHILE. Then we were joined by a guy who we found out was from Israel. He had flown in at five so he could see Anne’s house and some other high points of Amsterdam and he was flying out at 9 that night. Dedication.
Anne Frank’s house was incredible. For those of you who don’t know, I’ve played Anne twice in productions at Family Theatre and at the Springer so I have an oddly tangible connection with her and her story. It was touching and awe inspiring to walk through her room; see the pictures of movie stars glued to the wall; walk through the bookcase door; see the chestnut tree out Peter’s window from which she drew so much strength. I don’t posses the words necessary to describe it to you or even to think about it in anything other than emotions so I won’t even try. I will say though, if in your life you EVER have a chance to go…GO.
We then went to the Rijktsmuseum where we saw original Renoir and Rembrandt paintings. Super cool. Grabbed some lunch at an Italian place and headed to catch our train back home. Funny (and by funny I mean mildly humorous and moderately entertaining unless you were on the train…if that’s the case it was a HILARIOUS) story: We were riding along hyped up on the coke we got before we left; I was being riotously funny quoting movies and vividly describing the scene in Bambi where he gets shot in the neck and lives (“Bambi’s a real man: he got shot in the neck and moved on”); and we hear some Dutch over the PA. We look at each other with the same blank stare that we always use when listening to the languages in this part of the world; we wait for the familiar “Ladies and Gentlemen,” but it doesn’t come. People are starting to look angry and the train is groaning to a stop. Now our blank stares are replaced with wild confusion. Why are all the people so angry? Then we hear it: “Ladies and gentlemen, we are stopped. (really?) Due to electrical problems we will remain this way for a while. Please feel free to move about outside the train.” “Great!” I say. As I look out the windows at the German equivalent of a general store on one side and the pasture of cows on the other I continue with, “Please feel free to exit the train, kill a cow, make a hamburger, eat it, and be back on the train all before we’ve even THOUGHT about moving again.” After about 20 mins of motionless anxiety (except for me because I found the whole ordeal amusing) they announced that instead of taking us back to Koln, they were stopping at Dusseldorf (about 45 mins away). So we had to catch a connector, get to Koln, and catch our train back to Konigswinter. All around an adventurous day.
More later!